After soft-pedalling on the inflation issue since the beginning of the year, The Monetary Policy Committee (MPC) of the Central Bank of Kenya (CBK) pressed the panic button at its meeting on 5th October, 2011 and revised the Central Bank Rate (CBR) by a whopping 400 basis points, from 7.00% to 11.00%. Having seen inflation increase from 4.51% in December 2010 to 17.32% in September 2011, the MPC has finally realized that the “gradual tightening”, which involved raising the CBR from 6.00% in December to 6.25% in May and 7.00% in September, was not having the desired effect.

On its part, the CBK has maintained that the Shilling has been brought down by excessive speculation by commercial banks, and been further pushed by the crisis facing the Euro zone. The policies and actions put in place by the CBK have tended to address the issue of speculation, and sought ways to curb the same. This has included restricting access to the CBK’s discount window, threats of naming the banks indulging in speculation as well as announcing an intention of selling foreign exchange directly to importers, by-passing the commercial banks.

Our analysis shows the primary reason for the depreciating Shilling has been a very sharp deterioration in the current account balance, which has more than doubled in the 12 months ended June 2011. The decline in the value of the Shilling has a strong correlation with the increase in the current account deficit, as can be seen in the graph below. A second reason for the Shilling’s weakness is undoubtedly the Euro zone crisis, which has resulted in risk aversion, and a strengthening of the US Dollar against emerging market currencies. In the absence of any concrete data, we are unable to comment on what extent speculation has been a cause of the decline in the Shilling’s value. Commercial bank’s balances held in foreign currency have reportedly increased over the period; however, these include balances held on behalf of customers and therefore do not necessarily reflect speculative action by the banks. 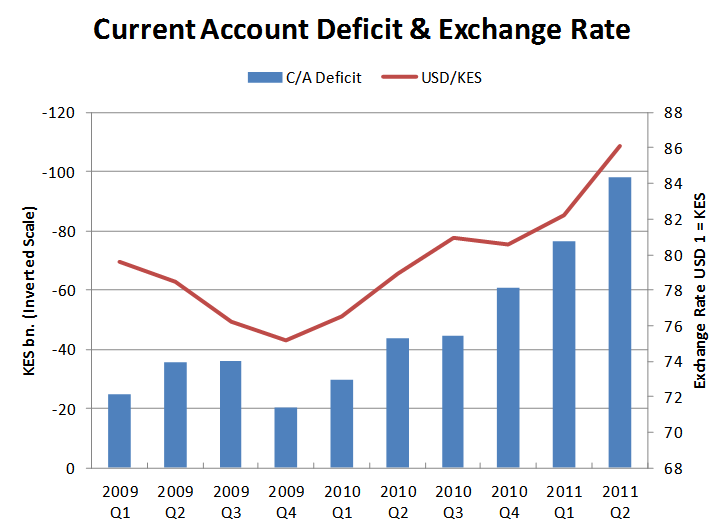 Following from this, the key issue to address in respect of the Shilling’s exchange rate at the policy level is the import intensiveness of the Kenyan economy, as well as the financing of the current account deficit by long term capital flows rather than by short-term investments. These are of course long-term measures and unlikely to provide relief in the short-term.

On the monetary policy front, the MPC has given a strong statement at its previous two meetings, held just 3 weeks apart, of tightening the monetary policy stance to rein in inflation and inflationary expectations. In our previous report following the September 14 MPC meeting we had opined that the increase in the Discount Rate to 10% was adequate and no further increase in the rate may be required.

In our view, the impetus for another increase within a period of 3 weeks has been due to a gap between the stated intent and the actual action by the CBK in implementing the tightening of monetary policy. Open Market Operations (OMO), in the form of Repos and Reverse Repos are the main instrument of achieving the desired level of money supply. Having announced a shift in the monetary policy stance, we would have expected the CBK to implement the decision by contracting money supply through use of Repos. However, the last time the CBK carried out OMO to remove excess liquidity was on June 14, 2011. Since then, the CBK has carried out OMO activity in the form of Reverse Repos, adding liquidity to the market, or the opposite of monetary tightening, in July, August and September.

Interestingly, on 21st September, one week after announcing a further tightening of monetary policy, and an increase in the CBR by 0.75% to 7.00%, CBK once again carried out Reverse Repos, to increase market liquidity. Further, the reverse Repos were carried out at an unchanged rate of 5.75%, despite the increase in the CBR. This action totally contradicted the announcements made a week earlier by the MPC and was probably the final straw that broke the camel’s back – in this case the USD 1 = KES 100 barrier.

As per CBK’s latest weekly report, the total borrowing by the Government from the market, since the beginning of the current fiscal year on 1st July 2011 is KES 17.8 bn negative. This means that the Government has, in place of borrowing, actually repaid money to the market. This of course adds to the liquidity in the market and acts contrary to the stated objective of the MPC of tightening monetary policy. We have however not seen any action by the CBK in removing this excess liquidity from the market, other than expecting/ hoping that some of this will eventually find its way into the Treasury Bills and Treasury Bonds, and help in plugging the gaping hole in the government’s borrowing program for 2011-12. Until this happens, we are in for high liquidity, leading to increased inflation and a depreciating Shilling.

The Shilling will recover only when the CBK is seen to “walk the talk” on Monetary Policy. The steps that are required to be taken have been identified and laid out in the MPC’s statement issued on 14th September 2011, and the CBK needs to operationalize the same. As a first step, we would expect to see the CBK undertaking Repo transactions to drain the excess liquidity from the banking system. In our view the increase of the CBR by 400 basis points is excessive, a reaction to the criticism that the CBK has been facing on the exchange rate from all quarters. Implementation of the identified measures will have a more immediate impact on the Shilling’s value than the increase in the CBR.

At this time, we are not making any forecasts about levels of interest rates and exchange rates. We will wait and observe the actual implementation of the tightening announced by the MPC, before making such forecasts.