In July 2012 inflation rate dropped more than the market had anticipated to 7.74% and subsequently interest rates have fallen with 91-days TBills currently at 8.58% as at 24th August 2012. The fall in inflation gives MPC room for further CBR cut during next month meeting and concern on stability of Kenya Shilling to be addressed by CBK continually mopping up liquidity.

Last month Monetary Policy Committee of the Central Bank of Kenya cut the CBR rate by 150 bps on 5th July 2012 to 16.50%. The CBR cut was supported by:

The first half 2012 has witnessed ease on interest rates and inflation. The 91-day Treasury bill yield has dropped by 668bps while inflation has dropped 1,116bps from the beginning of the year to end of July 2012. 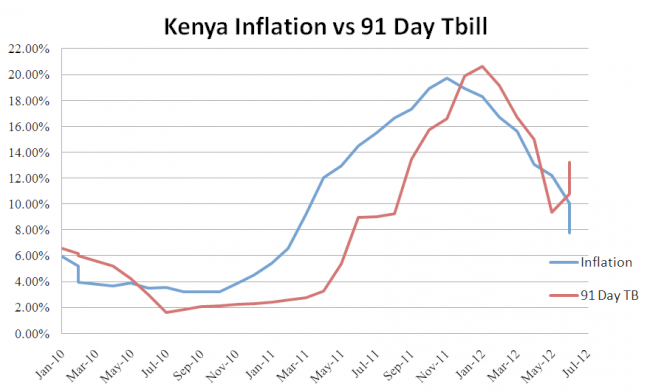 We expect the fall in interest rate to ease during Q4 2012 as the government moves to beat the borrowing target before end of this year considering next year is an election year.

Market yields have been declining since the beginning of the year, with a sharp fall in August after the CBR was cut to 16.5% and more than expected drop in inflation to 7.74% in July 2012.

The yield curve has moved downwards resulting to a rise in mark to market revaluation on existing bonds portfolio. 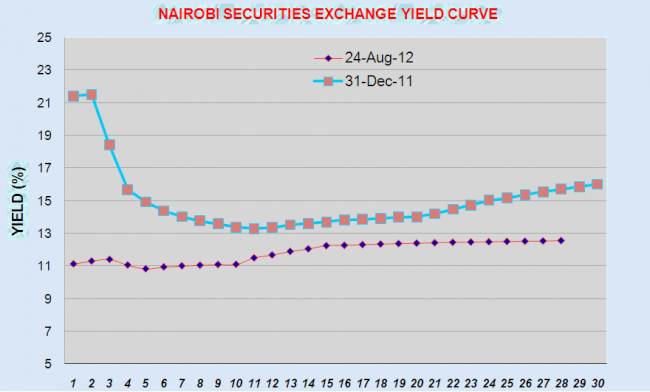 We expect within the next 1 month the yields on bonds to drop below 10% which will result to more mark to market gains. We recommend booking capital gains on the bonds portfolio and placing the proceeds on fixed deposits to buy back during Q4 2012 at higher yields.

The stock market continues to move north, with the NSE All Share Index up by 23% year to date. The stock market has been favoured by falling inflations and interest rates and impressive results that companies have reported during the year. 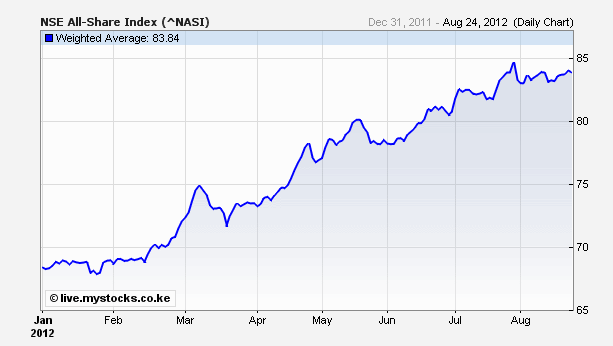 Summary of Results Announcements during the Period

Companies especially the banks started announcing half year results. In general the results have been impressive. However its worth to note that finance/interest cost has increased significantly across the board due to high interest rates witnessed in the last quarter of 2011 and first quarter of 2012.

We expect continued fall in inflation and interest rates to be favourable to the stock market going forward. Some reallocation of funds is expected from fixed income as interest rates continues to fall. However, it’s important to note that near the end of the year and beginning of next year we are likely to see reduced interest in the stocks market as we near general elections.

In the banking sector we remain positive on Kenya Commercial Bank and NIC Bank as we believe the banks have good growth prospects going forward and have very attractive valuations compared to their peers.

Centum Investments remains a buy considering it’s very cheap, trading at a heavy discount of 40% to its Net Asset Value. We believe it’s a matter of time for the market to realize Centum’s value.