Listed tea company, Kapchorua Tea posted an 18.9% jump in profitability in 2013 to stand at KES 180 million from KES 78 million. Sales dropped marginally to KES 1.35 billion from KES 1.4 billion due to declining tea prices and increasing production in the period. Its stock price has held firm, up 28% year-to-date and 132% since 2008.

Continued investments in plant and machinery has helped improve its operational efficiencies. As a result, profits arising from operating activities jumped a whopping 66% to KES 122 million in 2013. The tea firm invested over KES 110 million in new plant and machineries in the last two years. Profits arising from changes in fair value of biological assets rose to KES 57 million from KES 4 million.

With reserves of over KES 1 billion, the company can withstand any price shocks or any losses arising from a poor season. Cash at hand is at KES 128 million that brings it to KES 32.9 per share. EPS is at KES 45.94. What’s also admirable about the company is that interest received from interest-bearing investments more than covers their interest payable meaning a large portion of their cash flow goes is left untouched. Its unsurprising therefore that its revenues reserves stand a tad higher than a KES 1 billion.

Projected rainfall for the March-May 2014 ‘long rains’ season over the central and north-western counties is expected to increase according to Kenya Meteorological Service. This will go a long way in shoring up its production hence expectations for a bumper harvest in the next six months are valid. 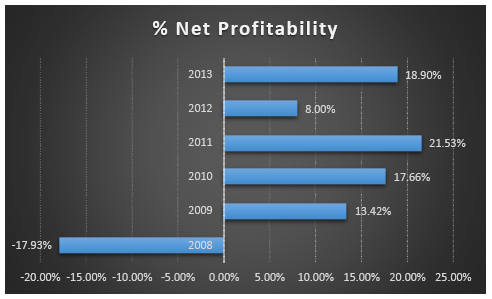 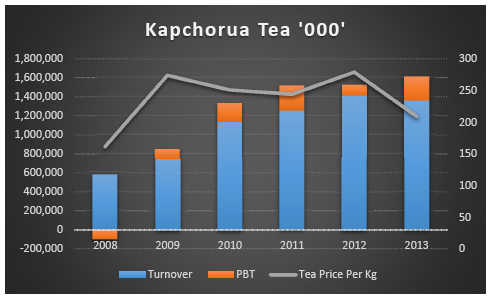 Challenges notwithstanding, the following factors should help buoy its price in the long run.

Despite being largely under covered by investment analysts, Kapchorua Tea has returned an average of 10.6% in the last six years comparing to a dismal -2.5% return by the NSE 20 Share Index in the same period. The current market price at KES 150 (As at 12th march 2014) is 1.5 times lower than its Net Asset Value while its PE Ratio stands at 3.27. This means bargain hunters are looking at a good valuation opportunity.

With only 3.9 million shares issued (one of the least after Limuru Tea ), only investors with a long term investment horizon form a perfect fit for this type of stock. As the global economy recovers, the long term recovery in world commodity prices is expected hence Kapchorua Tea stands to benefit.