The yield on the 91-day Treasury Bill continued its upward trajectory, reaching a rate of 3.52% at the latest auction. The rise has been somewhat muted as a number of banks have opted to invest in 91-day Treasury bills and give other maturities a miss, until the market is seen to have stabilized. This has resulted in a sharper increase at the longer end of the yield curves.

As forecast in our last month’s newsletter, the Central Bank (CBK) has been actively carrying out Repo transactions as part of its Open Market Operations at increasingly higher rates of interest, reaching 4.50% on 18th April. The Repo rate has the effect of putting a floor on short-term rates in the market, and consequently the overnight interbank rate has risen to over 5%. It is a matter of time before the 91-day Treasury bill rate follows suit.

This upward shift in the yield curve will result in substantial mark to market losses for investors with trading portfolios. With inflation having hit a level of 9.19% in March, and now becoming a headline item in the press, we expect to see further increases in interest rates and expect a further increase in the Central Bank Rate (CBR) by the Central Bank in May by at least 0.50%.

Nevertheless, we believe that yields have now reached attractive levels for medium-term to long-term investors to begin investing in bonds of 15 to 20 year maturities. Though there may be some mark to market losses in the short-term, as the market seeks to establish the equilibrium level of rates, the current yields are at attractive levels, with the possibility of capital gains at a later date.

As mentioned in our last month’s newsletter, the traded prices of bonds at the NSE do not provide a good indicator of actual yields and prices, and we would advise investors who are not fully conversant with current market yields to exercise caution in undertaking secondary market transactions in bonds.

The equity market recovered from its lows in March, but appears to have hit a plateau at current levels. The recovery has largely been driven by foreign buying, which has been over 60% of total purchases since the beginning of April, with focus on some specific counters – EABL, Safaricom, Equity Bank, Kenya Commercial Bank. As per figures released by the NSE, the Kenyan stock market was the worst performing of 16 selected African stock markets in local currency terms, since the beginning of the year. 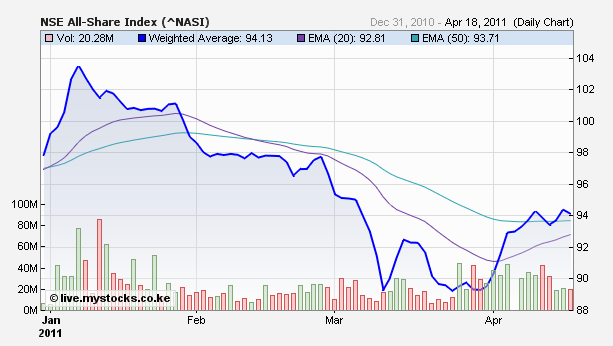 As stated in our last month’s newsletter, we are cautious about shares in the Financial Services sector, as we believe a number of banks will struggle to match last year’s performance. We are particularly concerned about banks whose 2010 performance was driven by large increases in the “Other Income” line, under which trading gains on bonds are reported.

We are cautiously bullish on a few counters in the Industrial Sector, which we believe are currently substantially under-valued. Our selected stock picks for this month are both petroleum-marketing companies: Kenol Kobil and Total Kenya.