In March and April we had given our stock picks I&M Bank (unlisted), Kenol Kobil (KENO) and Total Kenya (TOTL) – we revisit these stock picks in this newsletter.

I&M Bank announced quarterly results that showed a 40% increase in Assets and 52% increase in Profit After Tax over the same period in 2010. Part of the increase was accounted for by the increase in capital in November 2010, whereas a large part of the growth was organic. We interacted with the Board and senior management team of I&M Bank at their AGM and had the following take-aways:

We remain bullish on this counter and expect the bank to outperform in the Kenyan banking sector.

Kenol Kobil Limited (KENO) was one of our stock picks in April, and we had forecast excellent results for the first half of 2011. The company made an announcement on 13th June that the Net Profit for first half of 2011 will be at least 50% higher than the corresponding half year in 2010, driven by the Group’s strategies of geographical expansion and special focus on certain business lines.

We continue to be extremely bullish on this share and believe it is substantially undervalued. 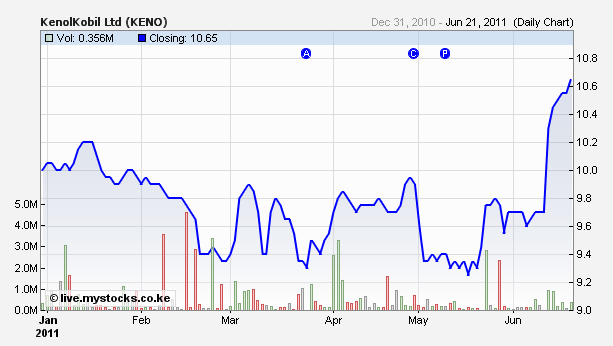 Total Kenya Limited (TOTL) was our second pick in April. The company announced disappointing quarterly results, showing a 10% decrease in profit before tax, with PAT remaining unchanged from a year ago. This is a substantial under-performance in favourable market conditions, and substantially lagging (KENO), which is in the same industry. The share price has also declined and the year to date performance of the stock is trailing the All Share Index. 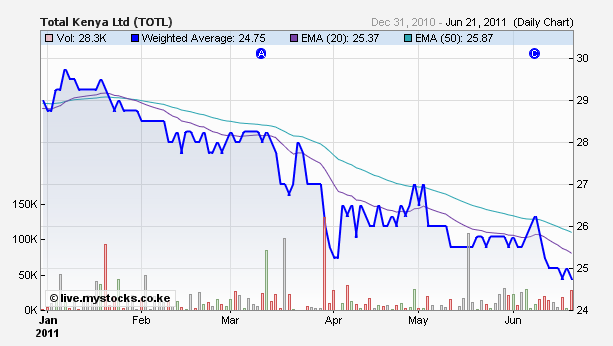 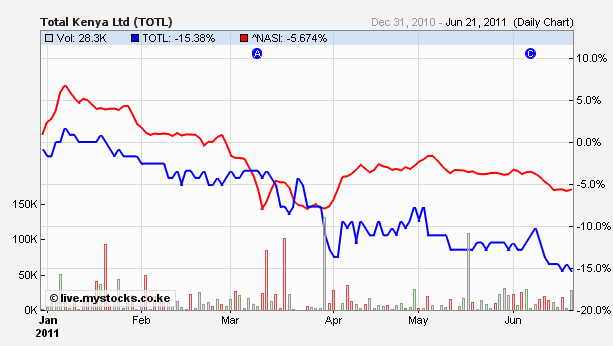 Total Kenya vs NSE All Share Index - Year to June 2011