The Monetary Policy adopted by the Central Bank of Kenya (CBK) since January has been sending conflicting and contradictory signals. At the Monetary Policy Committee (MPC) meeting held on 27th July, the Central Bank Rate (CBR) was left unchanged at a level of 6.25%, much against market expectations of an increase of 0.25% to 0.50%. We have tabulated below the observations and the policy actions taken on the monetary policy front since January 2011.

As per the Central Bank’s Monetary Policy Statement of December 2010, the Minister of Finance restated through a letter the Government’s overall inflation target of 5 percent to be maintained by the Central Bank of Kenya. With inflation currently standing at almost 3 times the target and with inflationary pressures unabated, it is our opinion that the CBK needed to and should have increased the CBR. Managing the supply sides of commodities are challenges for other arms of the Government, and if they are they are under-performing, it cannot be a reason for the CBK not to fulfil its mandate. Further we have reviewed the performance of the broad money supply against targets (see table below), and we do not believe the deviation is sufficient for the CBK to review its monetary policy stance.

At the current levels of inflation and the outlook for the next few months, we believe that the level of 8% for the overnight window, which was in effect for approximately 2 weeks was an appropriate rate, and the CBR will need to be raised to this level before inflation is tamed and the exchange rate stabilized. Whereas volatility in markets is to be expected, lack of consistency in the monetary policy will only prolong the period as well as the extent of volatility in the interest rate and the exchange rate markets.

We would also like to contrast the actions of the CBK with the stance taken by the Nigerian Central Bank, which increased its benchmark rate by 0.75% on 26th July 2011, the fourth increase in the rate this year. The statement from the Central Bank accompanying the rate decision stated that the bank “needed to correct the negative interest rate situation in the market and attract foreign capital inflows to build reserves.” This action followed a drop in the inflation rate for June 2011 to 10.20%, the lowest level in 36 months.

In our previous newsletter, we had commented on the distorted shape of the Yield Curve published by the Nairobi Stock Exchange, and offered an alternate yield curve to help players carry out a mark to market of their books for management purposes. We are delighted to see that the NSE has removed the distortions from their yield curve last week, and now has a yield curve which is upward sloping, but extremely flat at the long end. We believe the yield curve is reasonably representative of the actual market conditions. The chart below shows the movement of the NSE yield curve from December 2010 to 31st March 2011 as well as at 22nd July. The distorted yield curve of 30th June 2011 is also included for comparison. 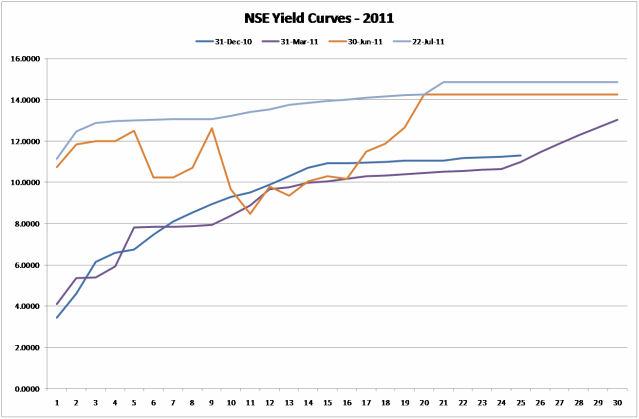 The yield curve currently has an extremely flat shape which we believe is not sustainable. The flatness has resulted from the CBK’s willingness to pay higher rates at the short end of the curve (>12.50% for the 2 year bond) while refusing to pay higher rates on the longer end (<13.25% for the 10 year bond). We forecast that the yield curve will steepen in the next 2-3 months, under one of the following scenarios:

Scenario 1 – Optimistic: The CBK is able to manage the short-end rates and guide them lower, with the 91-day Treasury bill rate falling to a level of 8.00-8.50%. The yield curve steepens with a fall at the short-end of the curve.

Scenario 2 – Pessimistic: The CBK is unable to raise sufficient funds and is forced to accept bids at higher rates at the longer end of the curve. The yield curve steepens with an increase in the long-end of the curve.

Prior to the recent announcement by the MPC, we considered Scenario 1 as the more likely scenario, and were positioning our client portfolios accordingly. However we have now revised our views and we believe that both scenarios are equally likely, and will therefore be standing aside for the short term.