The market was impacted by the uncertainty in global markets – the debt crisis in Greece and other European countries, the stand-off in the US regarding the debt ceiling and the downgrade of US Government debt by Standard & Poor. The NSE All Share Index fell to 76.14 on 25th August 2011, down 22.16% points from the beginning of the year and down 9.70% points from the beginning of the month. 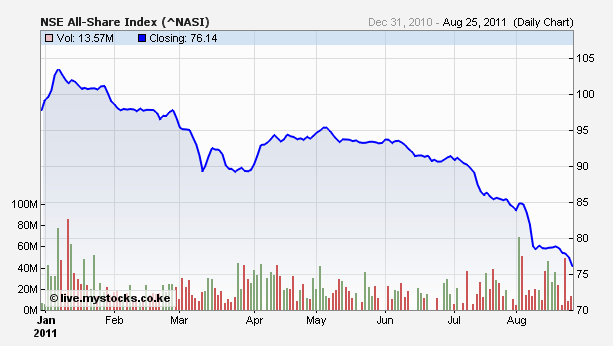 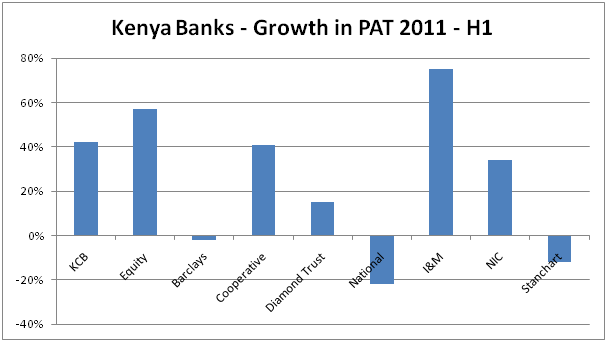 The performance of the 8 listed banks plus I&M Bank (potential listing in 2012) have shown a varied performance – National Bank was the worst performer with a 22% drop in PAT for the first half of 2011, with Standard Chartered and Barclays being the other 2 banks to record a decline in PAT. At the other end of the spectrum, I&M Bank has had the best growth in profitability, up 75% over the comparable period last year. Equity Bank, KCB, Cooperative and NIC have all recorded phenomenal growth, with PAT growing in excess of 30%, with Diamond Trust trailing at 15% growth.

We have in our previous newsletters stated that we have a negative outlook on the banking sector, yet the results appear to belie our expectations. In our April newsletter, we had analysed the impact of trading profits on bond portfolios as being a major driving factor behind bank profitability growth in 2010. However, with the interest rate scenario seen in the first half of the year, bond portfolios have faced substantial mark to market losses.

With bond portfolios comprising 15-30% of the balance sheets of banks, we would have expected banks to have taken the advantage of good performance under other income heads to absorb losses on their portfolios. However, of all the banks included in the analysis, only National Bank has taken a charge for the mark to market losses, amount undisclosed, in the profit and loss account. Some of the others have taken the charge directly against reserves, while a few of the banks have not re-valued the portfolios at all. It is therefore useful to weight the performance of the banks with the treatment of their bond portfolios.

We have attempted to do this in the table below, with the caveat that this is highly subjective, as the information is not readily available from the disclosed results of the banks.

We have provided three grades for the results announced by banks as under:

A – Mark to market on bonds reasonably provided and amounts disclosed in results announcements.

B – Mark to market on bonds provided but amounts not openly disclosed/ discussed. Not possible to judge adequacy of provisions.

C – Mark to market on bonds avoided, or if provided, provisions appear inadequate considering the size of portfolio.

Based on our subjective analysis, or analysis of bank results are:

With the interest scenario that we have witnessed in the last few months, there is likely to be a substantial squeeze in net interest margins in the second half of the year. Further, as significant holders of Treasury bonds, banks have suffered and will continue to suffer losses on the bond portfolios, whether explicitly recognized or not.

How big is the problem? To provide an idea of the potential size of the problem - one medium size, unlisted bank has made a mark to market provision in their books of KSH 2.8 billion on a portfolio of KSH 9.2 billion i.e. mark to market loss of 30% of their portfolio. The shareholders funds for the bank have reduced by more than 50% from 31st December 2011, despite the bank reporting a positive profit after tax. Admittedly, the problem may not be as large for all bank – however it does need to be highlighted and discussed, and we are disappointed that listed banks have glossed over this in their results announcements. A more open disclosure by the banks about the impact the recent movement in interest rates would have certainly contributed to the discussion on the “party” and the “hangover” that we referred to earlier.

With interest rates continuing to climb and the peak still to be witnessed, our outlook on the banking sector remains negative. Within the sector we continue to be positive on I&M Bank and are neutral on Standard Chartered Bank, Cooperative Bank and NIC Bank.

With stock prices having fallen by more than 22% since the beginning of the year, we believe that the market provides opportunities for acquiring selected stocks at very reasonable valuations.