The Leading Supplier of CO2 in East Africa - myStocks: Opinion and Commentary

The Leading Supplier of CO2 in East Africa

Carbacid Investment Limited , is a manufacturing and investment company publicly listed on the Nairobi Securities Exchange, Kenya. Carbacid (CO2) Limited, wholly owned subsidiary of Carbacid Investment Limited, is East Africa’s leading producer of natural, food grade, and compressed carbon dioxide (CO2).The principal activities of the main subsidiary, Carbacid (CO2 ) Limited, are mining and marketing of carbon dioxide gas for industrial and medical use as well as dry ice. The company is the largest supplier of pure natural CO2 in East Africa. Its major customers are drinks manufacturers, bottlers and breweries in several countries in the region. Their products include food grade CO2 for carbonating water, soft drinks and alcoholic beverages, Industrial CO2. Carbacid is the descendant of BEA Sawmills Limited, a company belonging to Mr Kitchener Morson, who first extracted carbon dioxide from a natural underground reservoir in Kereita Forest in Kenya, some 60 kilometres from Nairobi. Various mergers and acquisitions over the years saw the formation of Carbacid (CO2) Limited in 1975 and the listing on the Nairobi Stock exchange of its parent company, Carbacid Investments Limited.

Mr James Wanjigi is the chairman of Carbacid Investments Ltd and has been a board member since inception in 1970. He held senior Cabinet portfolios in Government such as Minister for Agriculture, Public Works and Tourism. He has been a member of several International Organizations including SOS Children's Village International of which he was the Founder Chairman for Kenya for more than 25 years. He is also a recipient of the prestigious award of the Elder of the Golden Heart of Kenya. The other board members include R A (Tony) Shepherd (non-executive director), Baloo C Patel (non executive director), Mukesh Shah (non executive director) and Dennis Awori (independent director).

The company registered a 2% decrease in turnover as it suffered from lower carbon dioxide exports (decreased demand in Central and East Africa) in the first half of the year. They salvaged the gross profit by reducing their direct costs by 5%. Profit before taxation reduced by 3% and the tax charge increased by 75% in 2015. This is because in 2014 Carbacid enjoyed tax investment allowances while in 2015 there was the recognition of the full tax amount. In addition to this, the reintroduction of Capital Gains tax on the revaluation surplus of investment, property and land as from 1 January 2015. This had an impact on the tax charge as well.

Carbacid’s (P/E) price earnings ratio (using the market price of Ksh 15.5) is 10 indicating that investors are willing to pay Ksh 10 for every shilling of earnings that the company has. This value is lower than the industry average of 17.64 and can be attributed to the drop in revenue in the 2015 financial year. The firm’s earnings per share for the financial year 2015 is 1.55 down from 1.93 during the previous financial year, which could indicates a decrease in earning power of the company. Carbacid’s dividend yield is 3.9% for the 2015 financial year is higher than the industry average of 1.2%. This is indicates an increase in the cash flow you are getting for each shilling invested in an equity position.

The firm’s Return on Equity is 15.87% in the FY 2015, down from 22.75% the previous year. The ROE is however the same as the industry average. ROE is a profitability ratio from the investor's point of view—not the company. This ratio calculates how much profit is earned based on the investors' investment in the company, not the company's investment in assets or something else. Investors want to see a high return on equity ratio because this indicates that the company is using its investors' funds effectively. Carbacid’s Return on Assets (ROA) is 24.2, up from 19.37 in 2014. An increasing trend of ROA indicates that the profitability of the company is improving.

Although Carbacid is the leading supplier of CO2 in the region, it is faced with stiff competition. After the Capital Markets Association rejected BOC Kenya’s plans to acquire Carbacid in 2005, the industrial gas manufacturer begun mining and manufacturing carbon dioxide in 2012. In addition to this, state-owned Geothermal Development Company (GDC) is set to enter the CO2 production business. GDC plans to extract the gases in its Menengai geothermal field in Nakuru for commercial purposes. This will intensify competition in the market. Significant currency movements, liquidity constraints, have affected 2015 and new competition from alcohol based manufacturers of carbon dioxide.

Despite the increase in competition in the market, the growth of the food and beverage industry has caused the demand for CO2 as a preservative to increase. The entry of alcohol based carbon dioxide producers in the region solidifies Carbacid position with clients who prefer Halal products.

We would hold on to our shares for Carbacid Investment Limited. Analysts give the stock a target price of between Ksh 16.7 to Ksh 24.7. Though currency depreciation and the economic downturn are factors that may affect the company’s returns, the firm still enjoys economy of scale and first mover advantage. It is also still a dominant player in the market across East Africa. Carbacid commissioned a new plant at Kagwe last year to reduce costs and boost quality of carbon dioxide produced. 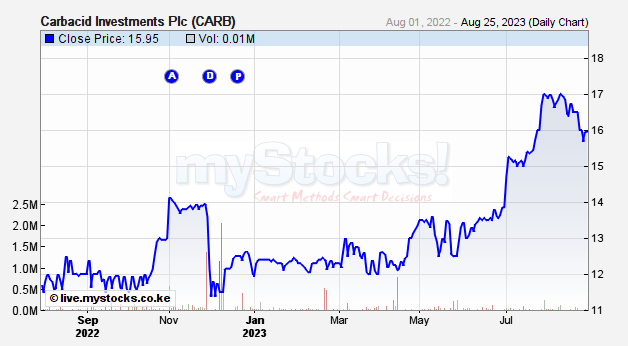