Why you should accumulate Safaricom shares - myStocks: Opinion and Commentary

Why you should accumulate Safaricom shares 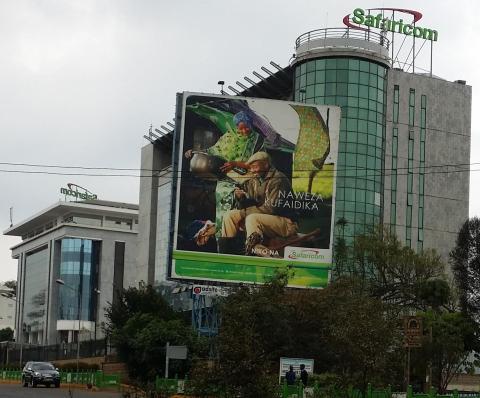 The ICT industry in Kenya is rapidly growing. It realized a growth of 13.4% in 2014 and now contributes an estimated 8.4% to GDP and with well-guided policies, the sector is forecast to attain the Vision 2030 target of contributing 10% to the country’s GDP by 2017.

Safaricom Ltd is the largest mobile operator in the Kenyan market. According to the Communications Authority, it serves over 23 million customers: more than two thirds of the Kenyan market, followed by Airtel, Orange and lastly FinServe (a subsidiary or Equity Group Holdings Ltd ). Its services include mobile and fixed voice, SMS, data, internet and M-PESA, a mobile phone-based money transfer service.

The report also estimates that M-PESA created total societal value of KES 133.8Billion during FY15. This is 4 times the M-PESA transaction fees earned by Safaricom in the same period, and means that M-PESA creates Ksh.79 of value for Kenyan society with every transaction. Most (86 percent) of the positive social impact created by M-PESA was in the form of increased personal savings for customers.

Some of the achievements are its continued rollout of 2G, 3G & 4G sites, the launch of a new M-PESA platform in Kenya, growth of Lipa na MPESA and regional cross border M-PESA transfers, rolled out an additional 620 km of fibre and connected an additional 300 buildings and finally fibre connectivity to Ethiopia

The current ratio (financial ratio that investors and analysts use to examine the liquidity of a company and its ability to pay short-term liabilities with its short-term assets) for the year 2014/2015 is 0.62, down from 0.74 the previous year. A ratio under 1 implies that a company would be unable to pay off its obligations if they become due at that point in time. A ratio under 1 does not necessarily mean that a company will go bankrupt since it may be able to secure other forms of financing; however, it does indicate the company is not in good financial health. A very high may indicate that the company is not efficiently using its current assets or short-term financing.

Safaricom’s quick ratio (also known as acid test ratio) is 0.46 for the same period, down from 0.66 in 2013/2014. This ratio looks at a company’s ability to meet its short-term obligations with its most liquid assets. The higher the quick ratio, the better the company's liquidity position. Safaricom’s debt ratio shows the need to improve on its borrowing practices and reduce its debt.

Safaricom’s Return on Equity over the period 2014/2015 is 32.56, up from 25.20 the previous year. ROE is more than a measure of profit; it is a measure of efficiency. A rising ROE suggests that a company is increasing its ability to generate profit without needing as much capital. It also indicates how well a company's management is deploying the shareholders' capital. In other words, the higher the ROE the better.

The Return on Invested Capital (ROIC) has steadily been increasing over the past five years. The ratio stood at 29.00 up from 22.53. This ratio measures the return that an investment generates for those who have provided capital, i.e. bondholders and stockholders. ROIC tells us how good a company is at turning capital into profits. If a company is able to generate ROIC of 15-20% year after year, it has developed a great method for turning investor capital into profits as made evident by Safaricom.

Safaricom’s boasts of its most valuable possession- MPesa. However, this year, Equity unveiled Equitel. Equitel's main value proposition to customers is its free money transfer to members and low fees to non-members. In addition to this, it offers lower interest rates on mobile money loans. Within the months of June and September Equitel boasts of issuing KES 4billion in loans. This has made competition stiffer and Safaricom retaliated in August by increasing tariff charges for third party transaction hence making Equitel to Safaricom money transfer costly to Equitel customers. However, Equity challenged this to the authorities who intervened causing Safaricom to reduce tariff charges effective in December 2015.

Safaricom also faces some competition from Airtel Kenya, as Airtel does not charge its customers mobile money transfer charges to any network unlike Safaricom.

The ongoing sale of France Telecom’s 70% stake in Telkom Kenya to Helios Investment Partners could become a credible threat to internet services providers. Helios boasts substantial stakes in undersea fibre optic cables that link Kenya to the global internet superhighway through the UAE and Mauritius. In addition to this, Telkom Kenya manages an inland cable network that runs across the country. Due to this, Telkom Kenya will be in a better position to undercut existing players in the industry in terms of internet pricing. Thus potentially stealing some of Safaricom’s market share.

Long-time competitor Airtel has launched complaints with The Communications Authority of Kenya on the abuse of dominance in the industry. This was following the instance where Safaricom was issued licences to deploy the 4G network without a clear agreement with other players on commercial terms. They have also threatened to exit the Kenyan telecommunications market if this issue is not resolved.

Although Safaricom faces some challenges, its strategy may help it attain a competitive advantage. The company is looking to further grow Lipa na M-PESA. It has embarked on a Retail Point of Sale Integration program (E-POS) and identified 600 tier 1 & tier 2 supermarket outlets to enable faster check out at the till and seamless integration to their point of sale system/cash register. The integration is fully supported jointly with its partners to reduce barrier to entry. Once completed on the Tier 1 and Tier 2 supermarkets, the E-POS program will be rolled out to key merchants in other sectors such as hotels, restaurants and targeted SMEs. It will continue to grow fibre to the building, fixed calling, cloud services and managed services. In addition, the company has partnered with a major financial services provider to enable SMEs to obtain cheaper finance.

According to research carried out by various investment analysts, the intrinsic value of the Safaricom share ranges between KES 18.67 to KES 20.69. A consensus forecast survey carried out by 16 polled investment analysts covering Safaricom Limited concluded that the company may outperform the market. Taking into consideration Safaricom’s recent impressive performance, you may wish to consider accumulating its shares.