Our previous month’s newsletter focused on the interest rate scenario and forecast an imminent change in the direction of Monetary Policy. On 22nd March, the Monetary Policy Committee of the Central Bank announced a shift in its monetary policy stance by increasing the Central Bank Rate (CBR) from 5.75% to 6.00%. This was the first increase in the CBR since June 2007 and followed a series of 8 cuts in the rate between December 2008 and January 2011.

2010 was the golden year for trading in the bond markets in Kenya, with the sharp drop in market interest rates. With interest rates on the rise, investors will witness mark to market losses on their holdings. We believe the period of rising interest rates will give investors the opportunity to acquire bonds at attractive yields, earn interest carry, and then look for trading opportunities when the interest rate cycle peaks. This will require patience and discretion in picking the right maturities with acceptable risk.

The equity market rose smartly for the first week of 2011, but has been on a slide since then. The optimism at the beginning of the year has been replaced by a sense of gloom, with a number of stocks at or near their 12 month lows. Very positive earnings reported by a number of listed companies have done little to lift the share prices. 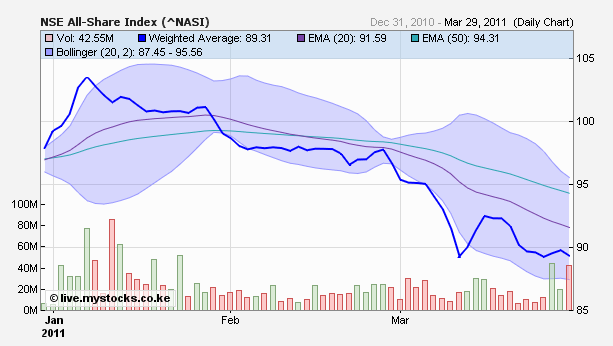 We are cautiously bullish on a few counters in the Industrial Sector which have lagged the market despite having produced good results for 2010 and having attractive prospects for the current year. We are more cautious on the Financial Services sector, as most of the listed banks and insurance companies will struggle to match their 2010 results which were driven by better interest spreads as well as bond trading profits for banks, and by investment returns for insurance companies. Both these factors are unlikely to be repeated in 2011.

Our selected stock pick for this month is an unusual choice. Firstly, it is from the financial services sector, which we believe does not have a very positive outlook this month. More interestingly, it is an unlisted stock. Our analysis is on the following page.