In our July newsletter, we had given our opinion that the Monetary Policy Committee of the CBK should have increased the Central Bank Rate (CBR) in its July meeting, and that the appropriate rate was at least 8%, instead of leaving the rate unchanged at 6.25%. On 12th August, the Central Bank once again reverted to a tight monetary policy stance, just 2 weeks after indicating that they did not believe tight policy stance would have the desired result.   The CBK revised the overnight rate with a formula that puts the overnight rate at a minimum of 3% over the CBR i.e. at 9.25%. The formula from the CBK does not specify a maximum rate, which has resulted in the rate spiralling upwards uncontrollably, with the rate crossing 20% on 22nd August. Events on the monetary policy front have become a cause of concern for the Government, with the Finance Minister commenting on the need to restore monetary stability and arrest inflation.

We believe that the increase in rates is warranted, but the increase has been too sharp for the market to absorb without having adverse consequences. We forecast that, having got its message across to the banking sector (though we are not sure what the message is), the CBK will relent and bring the overnight discount rate closer to 8%, without diluting its tight monetary policy stance.

The Yield on the Treasury bills, after a pause of a few weeks, resumed its upward trend, with the 91-day Treasury bill jumping by 45 basis points to 9.71% in this week’s auction. In our previous newsletter, we had given two scenarios for the likely direction of interest rates, which are repeated below:

Scenario 1 – Optimistic: The CBK is able to manage the short-end rates and guide them lower, with the 91-day Treasury bill rate falling to a level of 8.00-8.50%. The yield curve steepens with a fall at the short-end of the curve.

Scenario 2 – Pessimistic: The CBK is unable to raise sufficient funds and is forced to accept bids at higher rates at the longer end of the curve. The yield curve steepens with an increase in the long-end of the curve

From the outcome of the recent Treasury Bill auctions as well as this week’s Treasury bonds auction, it is evident that that the second (Pessimistic) scenario is now starting to play out. We now expect the 91-day Treasury bill to rise to double digits, and continue rising over the next few months to a level of 11%-12%. Similarly, the long-end of the curve will also rise – we estimate that the weighted average rate of the rejected bids for the 30-year bond was about 21.7% - this gives an idea of where the market sees the yield at the long-end of the curve.

The outcomes of the 2 Treasury Bond auctions conducted last week, along with the movement in prices since the previous issue dates for the bonds, are given below: 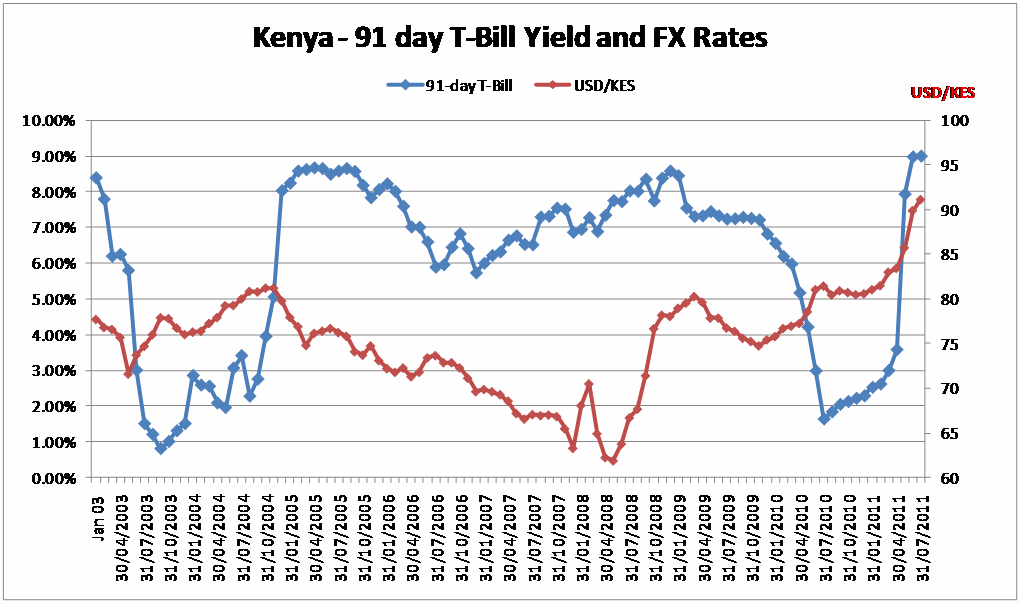 The policy makers need to consider the implications of the “V” shaped interest rate curve that we have now witnessed twice in the past 8 years, and the impact this has on the economy. Whereas the extremely low interest rates gave a good feeling while they lasted, the correction in both cases has been sharp and painful, impacting both the exchange rates and the interest rates. Probably, the appropriate question to be asked is “Was the party worth the hangover?”