Safaricom’s results for the year ended in March 2011 covered the most traumatic period in the company’s history. The company faced challenges from the regulatory regime, which were seen to be tilting the playing field in favour of competition. On the competitive front, the year saw the entry of the Indian telecommunication group Airtel, which took over the struggling Zain (previously Celtel, Kencel) operations. Airtel marked its entry into the market by slashing calling rates by over 60%, with the aim of gaining market share from Safaricom (over 80% at that time).

The year also saw the introduction of Mobile Number Portability (MNP) and a sharp reduction in Interconnection charges, all working against the market leader. In addition to the external factors, Safaricom also witnessed a management transition – from the charismatic Michael Joseph – in a sense synonymous with the Safaricom brand – to the much softer spoken Bob Collymore.

In light of all these factors, the drop in Safaricom’s PAT from KES 15.1 bn to KSH 13.1 bn came as a pleasant surprise, as a much greater drop in earnings was expected. Market share for Safaricom also dropped, but the company continues to have over 70% of the subscribers, and more than 80% of the industry revenue. The company has also lost less than 20,000 subscribers to competition after the introduction of MNP, much lower than its internal projections.

The key highlights of Safaricom results.

Revenue from data services was responsible for plugging a large portion of the revenue gap left by the sharp drop in Voice tariffs. M-Pesa, Safaricom’s innovative money transfer product, has been a major factor in customer retention as well as growth of data revenues.

The Government has suspended further cuts in mobile phone termination rates which were expected to go down from KES 2.21 to KES 1.44 beginning 1 July 2011. This means that the interconnection charges will remain at current levels in the medium term, giving the operators some level of revenue predictability.

Subscriber data released by the Communications Commission of Kenya (CCK) shows that Airtel and Orange have been picking up market share from Safaricom and Essar. Recent announcements from Essar regarding its Africa strategy cast doubt on its long-term commitment to the Kenyan market. The industry is probably headed for a duopoly between Safaricom and Airtel, with Orange (previously Telkom Kenya) remaining a fringe player.

We believe that Safaricom has been through its test with fire, and is well poised to maintain its market leadership, albeit with a lower market share. Apart from the numbers, the body language of the top brass at Safaricom House tells its own story. Nine months ago, there was a siege mentality; today, the team is much more relaxed and confident. Airtel does not dominate the discussion on the company’s future as it did then, and the management team is confident of managing any challenge. 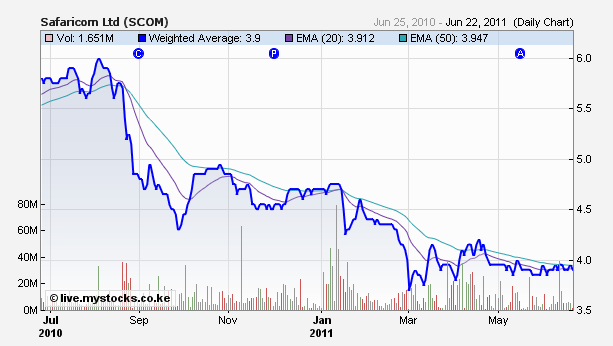