The Central Bank follows an accommodative monetary policy stance with the aim of stimulating economic activity. The monetary policy is successful in pushing market interest rates to record lows, as well as leading to a spurt in bank lending, and an increase in GDP growth. The low interest rates lead to a rush by investors to subscribe to long-term Treasury bonds in preference to Treasury bills, leading to a lengthening of the average maturity of Government debt.

Following a change in external factors, and with interest rate at record lows and an increase in money supply, inflation rears its head. The exchange rate of the Shilling begins a downward spiral. However the monetary policy continues to be accommodative.

The Government enters into a loan facility with the IMF - as part of the loan conditionality, monetary policy is subject to review by the IMF. This leads to a change in the monetary policy stance, and liquidity is sought to be tightened through Open Market Operations by the Central Bank. (For more on OMO, refer our February Newsletter). The upward move in market interest rates is implemented over an extremely short period, leading to expectations of very high rates by the market. Ultimately, the market seeks rates that are so high that the Central Bank is forced to reject all the bids received at an auction of Treasury securities.

In October 2004, the Central Bank rejected all bids at the auction dated 25th October 2004 for the 91-day and 182-day Treasury bills as well as a 1 year zero Coupon bond, as the rates demanded by the market were considered too high.

In the auction dated 13th June 2011, the Central Bank rejected 97% of the bids for the 1-year Treasury bill with the statement that “major investors in this market have pushed the rates to levels that make domestic debt expensive”.

The table below shows some of the key indicators in both circumstances:

By April 2005, 6 months after the cancellation of the Auction, inflation was on a downward trend, though still high at a level of 14.78%. The 91-day T-Bill rate peaked in April 2005 at 8.68%, and commenced a decline thereafter. The Kenya Shilling however had recovered substantial ground against the USD and averaged 76.15 for the month.

Our expectations are for a similar scenario to play out over the next six months in 2011 – inflation rates and interest rates levelling off but remaining high, and Shilling recovering ground against the US Dollar.

The Central Bank is conducting an auction of 2, 5 and 20 year bonds this week. The yields are expected to go continue their upward trends at this auction, which is the last one for the Government’s financial year 2010-11.

The Yield Curve published by the Nairobi Stock Exchange, in a reflection of the trades taking place in the market, has now taken a bizarre shape with various peaks and troughs. The yield curve, and bond prices calculated from this yield curve, will not be of any use to serious investors wishing to carry out a genuine mark to market of their books.

We will issue a special newsletter at the end of the month with an estimated yield curve and bond prices interpolated from this yield curve for use by investors. 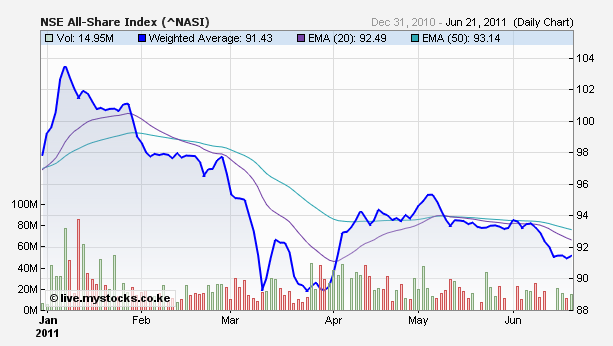 With interest rates at a multi-year high, and the Kenya Shilling flirting with its lifetime low, the outlook for the broad market does not appear favourable. We expect the market to move sideways, with a marginally negative bias.